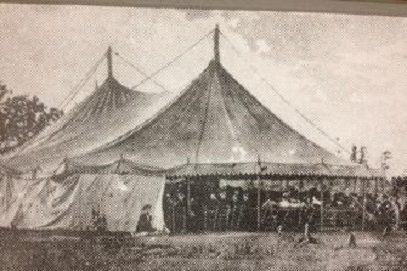 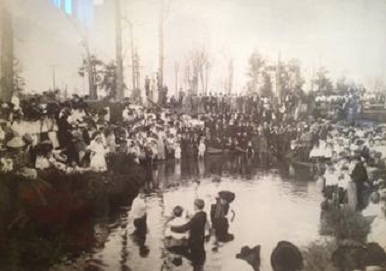 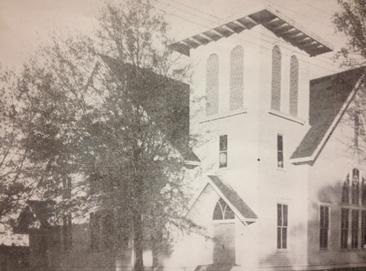 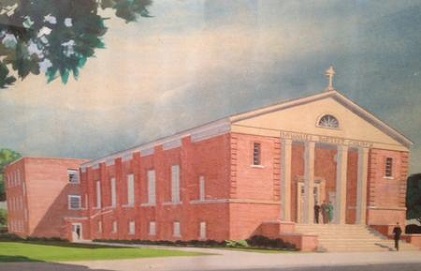 In November of 1906, South Mississippi College (SMC) opened its doors under the direction of W. I. Thames.  Seeing the need for a church to minister to the students attending SMC and to the people living in the surrounding areas, Dr. A. V. Rowe, Secretary of the Baptist State Mission Board, asked Reverend Alanson Lee O’Briant to consider the task.  Reverend O’Briant accepted the challenge, and in February of 1907, he, his wife Lucy Elizabeth, their child Lucy Nash, and Lucy’s mother Lucy Ann Jennings moved into 607 Tuscan Avenue, the first residence on that street.  Some people donated a large tent, and Mrs. W. H. Arledge donated a plot of land located on the corner of Arledge Street and Magnolia Avenue.  The church held its first baptism in Gordon’s Creek on July 7, 1907. It was officially established on June 9, 1907 with the following charter members:  Mr. and Mrs. A. L. O’Briant; Professor W. I. Thames; Mr. and Mrs. W. H. Arledge; their daughters Mittie, Irene, Hattie, and Lorena; Mrs. Ann Murphy (Mrs. Arledge’s mother), Mr. and Mrs. R. D. Batson, and R. W. Dunn.  Dr. W. F. Yarborough, pastor of First Baptist Church in Jackson, Mississippi, proposed that the church be called Immanuel, meaning God with us.  After some discussion, the membership agreed upon the name, and Reverend O’Briant’s first sermon was titled “Prayer and Faith: God with Us.”

Eventually, the Immanuel family needed a more permanent structure, so they purchased a piece of land at the corner of Tuscan Avenue and Cherry Street from Mr. John Burkett.  They planned to build a church building and a two-story parsonage.  Mr. J. B. Limbaugh was the contractor and was assisted by Mr. J. F. Stone.  Both buildings were completed and paid for by 1909.  The members of Immanuel took possession of their new buildings debt free because of the generous gifts of people like W. L. Phillips, who contributed the first dollar to the building fund, and the generous gifts of organizations like the Women’s Missionary Union of Immanuel ($100) and Main Street Baptist Church ($1000).

Once they occupied their new church building, Immanuel Baptist Church’s membership increased rapidly.  The young people worked vigorously, and two mission Sunday Schools were opened.  During normal services, the congregation filled the entire first floor, and on special occasions, the congregation filled the balcony and extra chairs were placed in the aisles on the first floor.  During these early years, South Mississippi College closed its doors due to a disastrous fire that destroyed its administration building.  It lay idle for two years, and this absence of students affected Immanuel’s membership.  Due to the decrease in membership, the church went to services only twice a month; therefore, Reverent O’Briant preached at Immanuel twice a month and at Fifth Avenue Baptist Church (now Temple Baptist Church) twice a month.  He did this until the Mississippi Woman’s College (MWC) opened in 1911 on the property of the former South Mississippi College campus.  Once MWC opened, O’Briant returned to Immanuel full-time.  Several years later, he resigned and was succeeded by Reverend T. W. Green.

Immanuel Baptist Church once again continued to grow during the 1920’s, but its membership was once again affected by the close of MWC in 1938.  Several more pastors ministered and then resigned during this period, and Immanuel faithfully ministered to its surrounding community.  In 1947, Immanuel once again began to experience dynamic growth because MWC (now William Carey University) re-opened its doors.  Under the pastoral leadership of Reverend Troy A. Sumrall, the church donated the first $1000 for improvements to be made on the college campus.  With this new growth came the need for a newer and larger facility.  In 1949, the church appointed a committee to study and plan for the church’s physical needs.  The decision was made and approved by the church to enter into the following building program:

Phase 2 – A Modern Auditorium: 120 x 50 feet, tied into the Education Building.  (The capacity at this point would be 700 for Sunday School, and 900 for worship services.)

Ground breaking for the Education Building was held on November 22, 1949.  It was constructed by the Odom Brothers Contractors and completed in 1951 at a cost of $75,000.  In the same year, Reverend Sumrall moved to Refugio, Texas and was followed by an interim pastor.

On the fifth Sunday in August 1952, Reverend R. Elmer Nielson became the next pastor of Immanuel.  He, his wife, and their three daughters moved into the new parsonage located at 1205 Cherry Street, which was built with the lumber from the demolished parsonage located on Tuscan Avenue.  Under his leadership, all of the church programs were revitalized and every department made progress.  During his ministry, 167 people joined the church, 58 of these were new conversions; the total membership slightly exceeded 700; Sunday School enrollment was 477; and Training Union was 152.  Due to this increase of ministry and membership, in 1954 the church voted to undertake Phase 2.  By 1956, the Building Committee had been formed, the architectural plans had been drawn, and Oden Construction Company had been awarded the contract.  The members dismantled the old building and sold the materials for $4,500, and Oden Construction Company finished the Modern Auditorium in October of 1956 at a cost of $150,000.  On October 21, 1956, Dr. Chester Quarles, Executive Secretary of the Mississippi Baptist Convention, preached the first sermon in the new auditorium and a corner stone was laid following the service.  In November of this same year, the building was formerly dedicated on a Monday night on which Dr. R. G. Lee preached his famous sermon “Pay Day – Some Day” with over 1000 people in attendance.

A couple of years later, Dr. Nielson resigned to accept a pastorate in Cullman, Alabama.  Several pastors followed Dr. Nielson, and during the 1950’s and 1960’s the church began a slow decline as the surrounding community changed and as young families and middle-aged members began to move from the area.  In 1975, the church became free of debt, but by 1976 membership had declined to such a point that the membership considered either closing the doors or relocating.  The membership determined to relocate and eventually called Reverend Phil Harris as pastor in 1978.  In the following year, the church purchased 2.6 acres of land and a three bedroom house on Weathersby Road just north of U. S. 98 West from Mr. and Mrs. F. L. Elam at a cost of $70,000.   They also sold the parsonage on 1205 Cherry Street and on December 15 signed a lease purchase agreement with New Testament Baptist Church for Immanuel’s buildings and property located at 608 Tuscan Avenue.  Upon moving to the new location, they purchased a chapel trailer and rented two house trailers from the Southern Colonial Trailers on U.S. 49 North.  They held their first services on December 15, 1979 and were joined by a group people from Calvary Baptist Church of Oak Grove.  That Sunday 92 people were present for Sunday School.

In 1980, James McCleskey Jr., an architect, drew the plans for phase one of Immanuel’s new facilities.  In order to assist the building process, the men of Immanuel organized the 1001 Club of Immanuel.  The men formed this club in order to help with the construction of the facilities and had the ultimate goal of seeing Immanuel’s membership increase to 1001.  In similar fashion, the women formed a group called the Women of Immanuel, which had the purpose of assisting in the construction and funding of the project.

On March 16, James MacMahon and Mac’s Construction Company began building the multipurpose building.  This building included a sanctuary, kitchen, choir room, offices, fellowship hall, library, and restrooms.  It was completed in October of 1980, and Reverend Troy Sumrall, a former pastor, preached the dedication sermon.  Soon after, Sunday School and worship service attendance grew rapidly, so the church purchased adjoining property, on which a sat a duplex apartment.  This purchase added 1.6 acres to the church’s property.

Several years later, Reverend Harris resigned in order to pastor Calvary Church in Petal, Mississippi, but in May of 1983 Immanuel called Reverend George C. Aultman as pastor, and he was accompanied by his wife Nell.  Under his leadership, Mac’s Construction Company erected an education building in 1985, and the church became very active in the Lamar Baptist Association.  During the late 1980’s, Brother Aultman led Immanuel to experience its greatest growth since its relocation to Weathersby Road.  For instance, in 1988 Immanuel averaged 251 in Sunday School, gained a resident membership of 698, baptized 33 people, and hosted 156 people in Vacation Bible School.  Since that year, Immanuel’s ministry efforts have not exceeded these numbers.

Eventually in 1991, Brother Aultman accepted a call to Maybanks Baptist Church in Hattiesburg, Mississippi, and the Lord brought Dr. Nathan Barber, Sr. and his family to Immanuel.  He was accompanied by his wife Patricia and one of his three sons, Patrick.  During his tenure, he led the church to be active in local and international missions, some of which include the Lamar Baptist Mission and trips to Alaska, Kosovo, Honduras, and Russia.  In 2001, he and the membership of the church started construction of a prefabricated metal building, called the Youth Hut.  By 2002, the building was completed and dedicated on February 23.  On November 23, 2003, the building was renamed “Jesse’s Place” in honor of Dr. James Jesse Palmer’s influence and hard work in seeing this project promoted and completed.  An anonymous donor paid off the outstanding debt on the building in April 2004.

Citing a difference of priorities between himself and many in the congregation, Dr. Barber resigned as pastor on September 23, 2003 after serving the Immanuel family for eleven and a half years.  Following his resignation, the church was without a full-time pastor until it called David Williamson in January of 2005.  Brother David began work on March 6 and was accompanied by his wife Jennifer and their two girls Kaitlyn and Peyton.  Since their arrival, the church has purchased a new bus, installed a playground, received the final payment from New Testament Church, and became debt free through a Chest of Joash offering.  The total membership, Sunday School attendance, and financial giving have increased.  The Lord has greatly blessed Immanuel Baptist Church over the past 100 years and will continue to bless Immanuel as its members seek to glorify Him by expanding His kingdom.

This History of Immanuel Baptist Church was compiled by former IBC Pastor, Dr. David Williamson in October 2007.  He consulted, copied, and paraphrased other histories of the church written and compiled by Mrs. A. L. O’Briant; Mrs. J. D. Howell, Sr.; Mr. Claude Smith; and Mrs. Sadie C. Barron.  Any errors in reporting names, dates, places, and events are the sole responsibility of the compiler of this history.